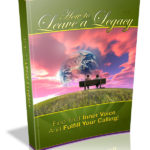 How To Leave A Legacy

Introduction
Legacies aren’t automatic; they are carefully built. You have to cherish the right goals and ideals. This eBook tells you how you should go about it.

Summary
Leaving a legacy is something most people don’t consciously think about, and those that do, are thinking of a larger picture, something that’s bigger than life itself. But, how do you leave a legacy for others to follow and peruse?

How to Leave a Legacy
Does the thought of leaving behind a legacy make you feel very small? Oh no, this is not for me, I am not Abraham Lincoln or Albert Einstein or Mother Theresa! Think again. For a change, don’t think of such great internationally acclaimed icons of achievement. Think of someone around you – your friend or relative or colleague at the office or your priest, just anyone who is or was a part of your daily life.

What do you instantly remember about him or her? Did he do something good for you or others? Did she create something special that benefited other people? Did they fight some small injustice in the system and change the rules for better? So you recall that stern old Murphy, your manager at the factory was also a kind and fair boss who was loved and respected by all your co-workers. It strikes you that it was your uncle Jim who led tithe fight to save the old Art Deco cinema house on your street from the wrecking ball and got it registered as a heritage property. And your mother’s incredible apple pies are spoken of by every family for three blocks down the road, all because she generously shared her recipe and egged on the young housewives till they perfected the Art of the Apple Pie!

There you are…that is legacy! When individuals imprint their deeds in the hearts and mind of people around them, they leave behind a legacy. Now think…what do people recall when they think of you right now? Good stuff? Bad stuff? Sad stuff? Oh, you never gave it a thought, did you? Maybe folks around you don’t recall you at all…

Uh oh, that probably makes you feel even smaller than before. But you now know what it means to leave a legacy, and how even the humblest person can leave behind a legacy. So get cracking, bang into the game and start doing YOUR thing – those simple but amazing deeds that will leave behind YOUR legacy.