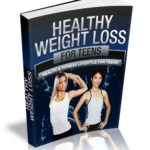 According to the National Center for Health Statistics, there has been a dramatic increase in obesity in Americans since the 1990s.

Obesity is defined as having an excessive accumulation of body fat which will result in the person’s body being about 20% heavier than their ideal body weight.

Although teens may have fewer weight related health issues than adults, if they’re already overweight, they are more likely to be an overweight or obese adult. Teens who are overweight (in fact people of all ages that are overweight) are at risk from a number of health issues:
1. Heart Disease
2. Diabetes
3. High Blood Pressure
4. Stroke
5. Cancer

Those teens who are obese may find that they are physically unfit, have a low self esteem, and general unhealthy well being. Many obese people will also tend to have a shorter life expectancy than those who are the right weight for their body size. Plus, it can also lead to social disabilities and unhappiness, which in turn may cause them stress and in some cases, may make them mentally ill.

A study in May 2004 suggested that overweight children are more likely to be involved in bullying than those children who are a normal weight. But they can not only be the victims of bullying, they may be the perpetrators as well.

The development of their own personal identity and body image is an important goal for any teenager.

There are a number of causes for obesity which center around an imbalance in the teens energy they put into their bodies, (calories that they obtain from the food they eat) and the energy they release from their bodies (how good their metabolism is, and how much physical activity they take part in). Often when a teen is overweight, there is a problem with the nutritional value of their diet. It could also be a result of psychological, familial or physiological issues.